We’re in Switzerland, in the canton of Valais with Mr. and Mrs. Carron. When they decided to build an extension to their house, they asked themselves the question of renewable energy and more specifically solar panels. They chose the solution that seemed the most efficient and above all the most aesthetic for their flat roof: the DualSun hybrid solar panel.

According to Mr. Carron, “with each project, the question of renewable energies must be asked”. As a result, the new cube shaped extension suddenly offered them a flat surface available. In the end, they installed 6 DualSun hybrid panels and 6 DualSun Flash photovoltaic panels. To complete this installation, a pellet boiler was installed in the house.

At each phase of the work, the question of renewable energies must be asked.

In fact, until the work was done, the house was running completely on electricity. Even if Mr. Carron feels that the electrical system uses a lot of electricity, at least he finds it reliable, because there are no outages.

The motivation to reduce their electricity consumption and produce hot water first made them consider solar thermal. But the problem was that the thermal panels were very large and would have had to be tilted considerably. Therefore, they would have been very visible.

That’s when the company Coutaz, installers of solar panels in his region, proposed our hybrid solar panels, both thermal and photovoltaic. An innovative, high-performance and aesthetically pleasing product, that’s what they liked!

On their extension, there was room for 6 DualSun hybrid solar panels. In addition, they added 6 DualSun Flash photovoltaic solar panels on another section of the roof. These panels were financed by the “Rétribution Unique”, a tax aid available in Switzerland. The DualSun installation is aligned with the construction of the extension to make it as aesthetically pleasing as possible.

Visually, the result satisfies them a lot and according to his daughters “it’s nice!”. The Carrons also took advantage of the energy renovation work to add a pellet boiler (wood pellets) for auxiliary heating. This wood boiler will provide 50% of the heating.

The solar installation went very well. Moreover, Mr. Carron worked as a project manager, supervising the work. Present at the meetings, he followed the construction site closely even though he had full confidence in the Coutaz company, which he already knew.

“Renewable energies, in any case, we’re getting there”

According to Mr. Carron, the question of Renewable Energies must be asked in principle.

Even if the gains are above all ecological, we must take steps in this direction. Because, as he notes, more and more people are coming to renewable energy. In Switzerland, cantonal obligations in this area are increasingly demanding as part of the federal energy strategy.

Furthermore, the introduction of renewable energies also gives children a good image, even if they are already aware of them in schools. In fact, his daughters are concerned about the solar installation and are delighted with the result.

Today the Carrons can compensate their electricity consumption by their solar installation and enjoy their solar showers. The electricity produced by the hybrid panels and by the DualSun Flash photovoltaic panels is self-consumed on site. Finally, this solar installation is equipped with the T-Box, our thermal monitoring box. The T-Box records, monitors and optimizes the hot water produced by the DualSun solar panels and delivers all the data to our MyDualSun solar simulator!

Click here to see the installation in real time

Click here to see temperatures for the last 30 days 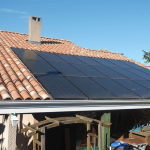