Bouygues Construction, global leader in sustainable construction, has transformed its headquarters into a showcase of energy renovation with numerous major projects including the installation of 300m2 of DualSun hybrid solar panels to provide 70% of the hot water needs for the 3,000+ employees.

The building, located in a park of 30 hectares in Guyancourt (Yvelines), is composed of a surface of 68,000 m2. Built in 1988, the site hosts 3,400 employees and aimed to be a « technological showcase of the twentieth century ». In 2008 the site begun a renovation with the goal of becoming one of the very first sites renovated with renewable energy that would bring to its employees a comfort and positive energy by improving the work environment.
The “city of the future” will consist more and more of existing renovated buildings rather than new ones. Therefore, through this project Construction Bouygues hoped to show its expertise in this field and to test, through a full-scale test, the latest innovations from its R&D programs.

By following the triple certification HQE Exceptionnel, Leed Platinum and Breeam Outstanding, the renovation of Challenger involves several important energy improvements such as insulation and wastewater treatment. With regards to the solar production, the site boasts more than 25,000 m2 of SolarWorld photovoltaic panels that will provide nearly 2,600 MWh of electricity per year. The energy will be consumed directly on site and during the periods of the year where production will exceed the consumption, the electricity will be sold to an energy producer.
The energy renovations also includes a water loop energy system for thermal control of the building (heating and cooling).

Bouygues Construction had originally planned the installation of conventional solar thermal panels but finally opted for our new technology, therefore replacing 420 m2 of thermal panels by 300 m2 of 2 in 1 DualSun (180 panels).
Our PV-T DualSun technology convinced Bouygues Construction that, as mentioned before, sees itself as the vitrine of new technologies for energy buildings of the future.

The DualSun solution made the difference thanks to three important key points :

– Performance : The innovative side of our dual-energy technology (electricity and hot water) is reinforced by the fact that we are doubly certified by IEC concept and Solar Keymark.
– Design : The great design of DualSun : our PV-T panel is visually identical as the SolarWorld PV panels installed on Challenger (which is not the case of thermal panels). They allow a uniformity of the total appearance of the solar installation on the site. Bouygues Construction wanted, indeed, to « preserve the visual appearance » of its building.
– No overheating : Overheating is avoided since DualSun panels have a stagnation temperature that does not exceed 75° C (167 °F), which is ideal for a building that is closed on weekends.

DualSun integrated into a global system of energy performance

The electricity produced by the DualSun panels, as all the electricity produced by SolarWorld panels, will be consumed directly within the building.
For the production of hot water, the DualSun panels installed on Challenger operate at low temperature and are coupled to heat pumps/water high performance, allowing the production of hot water, but also a gain 10% of the photovoltaic efficiency. 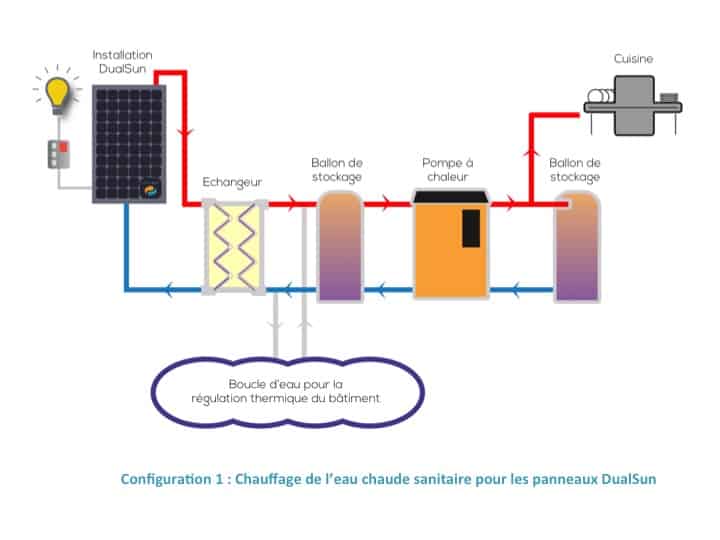 On days when there is no sun, the thermal water loop will take over and serve as a source of « calories » for the heat pump.

In addition to electricity and hot water during the summer months, the DualSun panels will be connected to the grid loop water to do the cooling of the thermal water loop overnight.

In total, 300 m2 of panels DualSun will cover 70% of the hot water needs of the cafeteria, on-site restaurants and the gym (3,400 employees). Bouygues Construction and DualSun share a common vision about the energy potential of buildings: a building that will start consuming less, and will then become the producer of its own energy.

On June 12th of 2014, an event was organized at the Challenger site, where the CEO of DualSun, Jérôme Mouterde, and the Deputy Director of Bouygues Energy and Services, and technical project manager for the installation, Marc Sarniguet, installed the last of the 180 DualSun panels. This event was very important and symbolic for our start-up. Here, you can check the report of BFM Green Business from Nathalie Croisé, who was at the event (from 6mn 40seconds, french language).

This year, Bouygues will be a sponsor of the Solar Decathlon, which will take place in Versailles. During the event, which will open its doors on June 28th, visits of the Challenger site and the DualSun installation will be organized. Take this golden opportunity to come and see closely our innovation !